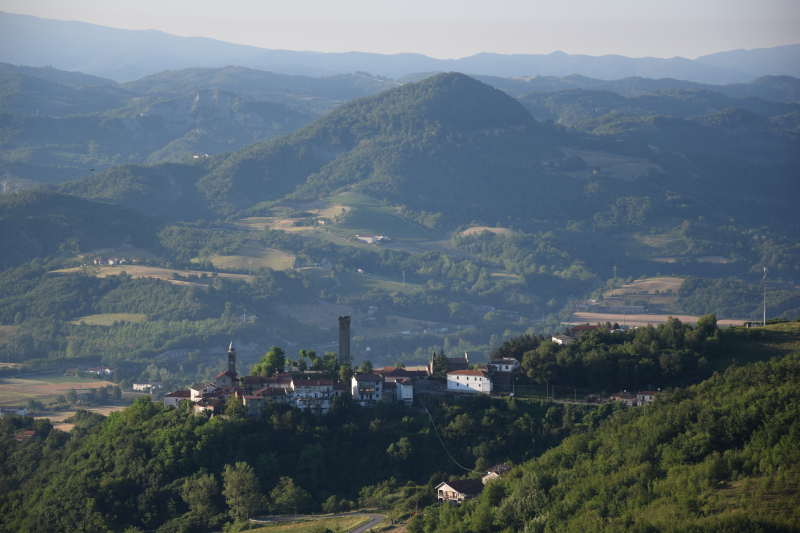 Getting to Denice from La Cascina Langa is a pleasant walk of 5 kilometers, with no particularly challenging gradients, between chestnut, oak, elm, and acacia woods.

On foot, it takes about an hour and a quarter to get there and back.

The village has a particular circular shape, which is found in other medieval villages of central Italy, with a defensive purpose. The inhabited area is a cluster of small houses, narrow streets, archivolts, all in stone and all clinging under the medieval tower.

The heart of the town is San Lorenzo , a delightful little square with a beautiful small simple church that dates back to the 15th century. If you find it open, enter and look the fifteenth-century frescoes … they are a fine example, of a rural version that is anything but rough with pictorial themes of the early Renaissance.

The tower , of fourteenth-century origin, is particularly slender and graceful compared to other contemporary examples and has a refined crenellation at the top. From the top of the tower, the view extends far … you can see the gullies of Montechiaro, the picturesque village of Castelletto d’Erro in the opposite hill, and, in some days, a large part of the Alpine arc.

The Belvedere trattoria restaurant is highly recommended, whose owners Maria and Gianni (who is also the chef) offer very typical Piedmontese cuisine and a family atmosphere, with a suggestive view of the hill from the large window of the room. Call before you go, because the Belvedere only opens a few days of the week.

If you take a stroll around the town, you will see here and there modern tiles and tiles inserted in the frame of ancient stone walls: the idea of ​​the municipal administration is also to create an artistic bridge between this area of ​​Piedmont and the Ligurian area ceramic art.

The most valuable insert is an authentic Roman bas-relief, with three faces, placed today to crown a front door of a private house. A precious medieval tile representing a soldier without weapons but with abundant footwear, now set between the walls of Denice, was found in the lands around La Cascina Langa.

The “Sagra delle bugie” (fritters) on the third Sunday of May.

Between 6 and 10 August: Feast of San Lorenzo , which is the patron saint of the town. A heart-felt procession through the delightful streets of the small town, with the participation of most of the citizens of Denice, then local food and wine and games

Other village festivals and festivals in the area :

In Bubbio , the Threshing Festival and gathering of vintage tractors, first Sunday after mid-August. Beautiful old agricultural vehicles, which are also put into operation, pork, wine, and desserts.

In Sessame the Sagra del Risotto on the first Sunday of May:

It has been held for 300 years, or since, in the 700s, the risotto – previously noble food privilege – became part of the Piedmontese common food. It is not known if the festival evokes a gesture of generosity from one of the many marquises del Carretto, who gave laughter to the people after a long famine, or if instead he remembers that the women of the place, in a moment of strong economic crisis, were induced to leave the villages of the Langhe to go to work in the plains like weeders …

Castelletto d’Erro , third Sunday of May, the Strawberry Festival : freshly picked strawberries converge in large quantities at the foot of the medieval tower, where you can eat and buy. The event also includes music, non-competitive walks, and local food and wine.

Third Sunday in July the “Sagra delle Pesche” and the patron saint of Sant’Anna.