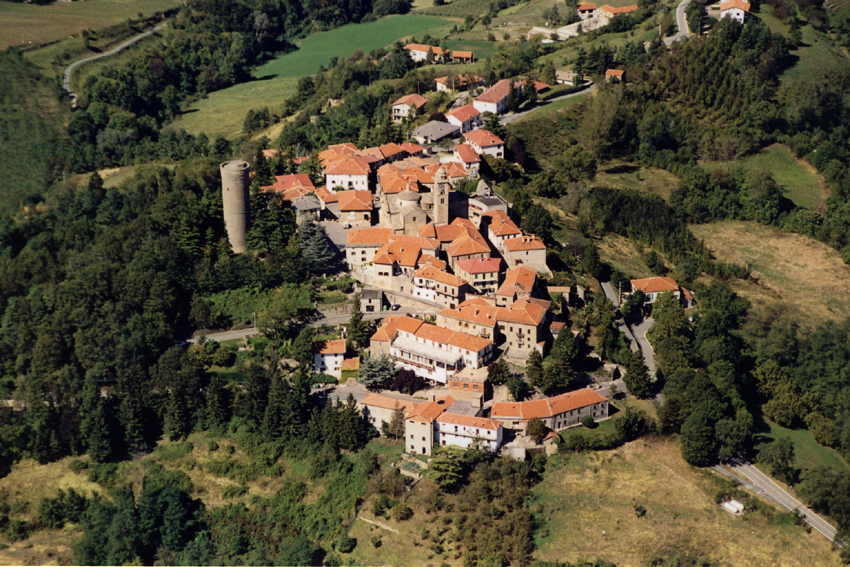 The charming Roccaverano, 760 meters above sea level, can be reached in about an hour and a half walk on the outward journey (uphill) and an hour on the way back (downhill). Travel times by bicycle: 40 minutes on the way. By car: about 8 minutes.

The central square is bordered by … masterpieces! On one side, mighty medieval walls – with a graceful mullioned window in the middle – and an equally powerful circular tower, on the other, a Renaissance church with a plan and facade by Bramante! All surrounded by breathtaking views of the beautiful surrounding hills.

The church is one of the wonders of Italian creativity: at the beginning of the sixteenth century, a Monsignor native of Roccaverano, during a trip to Rome, managed to get in touch with Bramante’s study, had a plan and facade designed, and had the building built with the poor material available, namely the Langa stone. The result is a resounding combination of elegance and simplicity, that is a magical combination of the simple divine proportions and perspective games of Bramante with ancient centuries-old techniques and local building materials …

In the square overlooks an excellent restaurant, Osteria del Bramante Managed by Giselda, who is also the chef, it offers typical Piedmontese dishes, some in a very traditional version, others with some successful variations, all done by hand .., The restaurant also has a bar for one of the most suggestive aperitifs in Piedmont: tables in front of the church of Bramante, which at sunset is tinged with a golden veil enhancing the beauty of the Langa stone and revealing all its shades: from warm yellow, ocher to beige…

Leaving the center of Roccaverano, there is a tiny church, the parish church of San Giovanni, another treasure chest of art! Because it contains the most complete cycle of frescoes Gothic in Piedmont … Again an example of how the Renaissance that lingered in the great Italian cities radiated everywhere, and how it could be lived and reinterpreted by local workers. Not far from the church of San Giovanni, already in the middle of the countryside, the majestic Torre di Vengore, a 13th-century tower stands out in the middle of woods and fields. A square base, tall and mighty, it was a lookout tower.

Roccaverano is also the home of goat cheese, recognized as a Slow Food Presidium … considered one of the best Italian cheeses.

Feast of the 5 towers: the country comes alive for the departure and arrival of the organized walk with Cai assistance and refreshments along the route.

Polenta festival, between the end of May and the beginning of June.

13 and 14 August: Feast under the stars the central square lights up and for two days it is filled with wonderful dishes of the Langhe, always accompanied by the famous Robiola di Roccaverano. At the end of the dinner music and dances, even late.

First Sunday of September: Caprine Feast: the best goat specimens from which the famous cheese is obtained converge in the village … The event concludes with the awarding of the best goats and is an opportunity to taste also other gastronomic delights of the area.

Last weekend in September: Feast of San Gerolamo. Foods, wines, and games, in honor of the town’s patron saint.